Last time out we looked at a simple strategy involving MACD and RSI indicators; today we will look at another simple strategy, again utilizing the MACD, only this time we will filter it using a less subjective indicator, the parabolic SAR.

The parabolic SAR indicator, according to Investopedia, is an indicator which is graphically depicted on a chart as a series of dots placed either above or below price action, depending upon the vector of price movement. A dot above price action denotes a downward trajectory, while a dot placed below price action indicates an upward price trajectory. Check out the chart below: 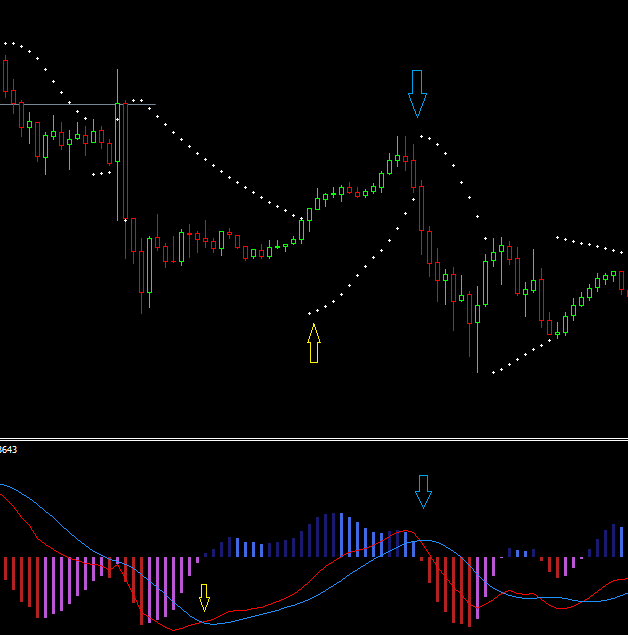 This is a 30 minute chart for the EUR/USD. On the lower part of the chart we have the MACD indicator with the traditional 12, 26, 9 settings. The yellow arrow is pointing to a crossover of the signal line to the upside, signaling a long position (which matches the histogram flipping to the upside right above it). About 13 candles later, we get confirmation from the parabolic SAR (yellow upward pointing arrow). At this point would enter a long position which is good for about 30 pips in this example. A few hours later we have a nearly simultaneous cross of the MACD signal line to the downside (right under the downward blue arrow) and confirmation from the parabolic SAR, which could have netted 40 to 50 pips.

Let’s look at another example: 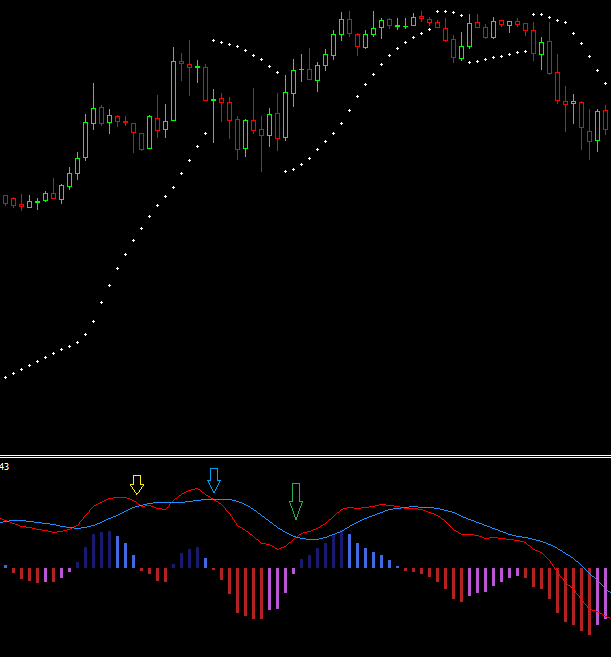 Again were looking at a 30 minute chart of EUR/USD. On the MACD indicator, the yellow arrow is pointing to a signal line cross to the downside; however, the parabolic SAR is still showing a long position (dots below the candles). In this case we would not enter a trade, and rightfully so because price action actually continued upward! Remember this very important tip – never trade against parabolic SAR. A little later the blue arrow is indicating a short position as the MACD signal line crosses below the MACD line. In this instance we have confirmation from the parabolic SAR, and we’re good for a possible 18 pips here. And a little later on, the green arrow shows an MACD cross to the upside, which is also confirmed by the parabolic SAR, good for another 20 pips. There, wasn’t that easy? The parabolic SAR is fairly definitive in terms of identifying direction (that is, after the candle is closed when the signal changes). A little less daunting than interpreting a possibly fickle RSI indicator (not that there’s anything wrong an RSI indicator, it’s just that some indicators are more definitive than others, some are less laggy, some are more black-and-white, and so on).

Something else that makes trading easy is being part of a trading community, and one I strongly endorse is Slick Trade. If you’ve been thinking about becoming a member of a trading group, then you may want to check out Sapphire membership in the Slick Trade Academy. Why not sign up and give it a try? A great opportunity for beginners to learn Forex while getting some hands-on experience with trading, receiving trade signals, accessing expert advisors (like my favorite Sominex), great strategies, Nadex signals, as well as help and insight from other traders just like you and more! And if you feel that it’s a bit daunting setting up expert advisors and indicators in meta-trader four is a bit daunting, Slick Trade can help with that too. Don’t delay! Sign up today!

That’s all for today – next time out were going to take a close look at the indicator I haven’t talked about before. Until then, good luck in the market and have a great week!